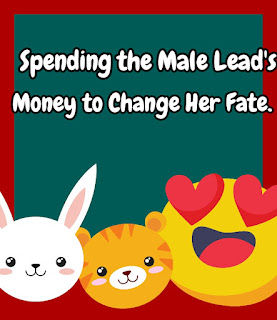 I have picked up this novel.

Lu Mingcheng put his hand in his pockets and remained silent for a while and said: ” My wife said this herself? ”

Lu Mingcheng raised his eyebrows. Although he felt incredible, he didn’t ask any more questions.

Seeing the back of Lu Mingcheng who is going back to the box, Xu Chen touched the tip of his nose and felt the situation very incomprehensible.

He also asked Jiang Qiuyi twice just like Lu Mingcheng before he was sure that he was not having hallucinations in his ears.

He raised his eyes and looked at the ceiling and couldn’t figure out what medicine Lu Mingchend is selling in the gourd. ( meaning what is in his mind?)

Xu Chen shook his head and speeded up his steps to the front desk and opened another suite fo Lu Mingcheng’s rest.

You have your own presidential suite and you can’t live in it, Lu Mingcheng is experiencing this right now.

After listening to the Jiang Qiuyi and Lu Mingcheng assistant phone call, Jian Xia looked at her like she is a monster.

Jiang Qiuyi took off her coat and looked at her sideways: ” What  am I ?”

Jian Xia swallowed her saliva with difficulty, blinked, and said, ” You spoke to Assistant Xu like this are not you afraid he will tell Mr. Lu ?”

” Huh? ”  Jiang Qiuyi smiled as if she have heard something interesting and said, ”  All I want him to tell Lu Mingcheng the truth.”

She looked at Jiang Qiuyi ‘s breezy expression, rubbed her eyes in disbelief, and muttered, ” Damn it.”

Seeing Jiang Qiuyi smiling and not speaking she pondered to inquire: ” Mr.Lu, could he be cheating?”

Otherwise, according to her friend’s character, she wouldn’t be able to do this kind of thing or say that kind of thing.

Hearing this Jiang Qiuyi stared at her for a few seconds and said quietly: ” No.”

Jian Xia didn’t let go of the suspicion of her heart that she was holding and asked again to be sure: ” Really? ”

Jiang Qiuyi’s eyes curled and she whispered softly: ” If he was cheating, I won’t just spend his money.”

Jian Xia thought about it, it make sense.

If a dog dares to cheat, he must be ruined.

Jiang Quiyi didn’t talk to her much about this matter and asked in a low voice,” I will rest later, do you want to do Spa or Styling first?”

Jian Xia’s attention was immediately turned: ” Do spa first? I don’t think there is time for it? ”

Jiang Qiuyi met her exclusive beautician on WeChat and said coolly: ” If it is late, I will let them come straight to the hotel to do it for us, without changing the place.”

Upon hearing this, Jian Xia couldn’t help but sigh again.

It’s fu8king good to have money.

After a good lunch break, a private beautician team came to serve the two of them.

Jiang Qiuyi lay on the bed and asked them to take care of their whole body.

The sun outside shined through the curtains, the room was dimly lit, and only the scented candles were burning.

” Miss Jiang, Is this strength okay?”

Jiang Qiuyi said ” Yes”  and said in a low voice, ” The strength on the shoulders can be increased a little bit.”

Jian Xia whispered in her ear: ” You know, I was really served this way for the first time in my life.”

Jiang Qiuyi glanced at her.

Jian Xia couldn’t help but sigh: ” Really, I went to the store in person last time and took the card you gave me. They were lukewarm to me, nor as enthusiastic as they were today.”

Jiang Qiuyi laughed and said in a low voice: ” If you like it, I will call you more often in the future for this.”

She looked at Jiang Qiuyi’s white face and whispered: “It’s nice to have money.”

This salon is very popular, many wealthy wives, ladies, and daughters will come, and they also have door-to-door service.

She came with Mrs.Lu here twice and the people inside are properly acquainted with her.

As soon as she appeared, she was taken to the VIP box, where good tea and deserts are delivered as soon as possible.

The salon director appeared  and asked with a smile, ” Miss Jiang, it has been a long time since I saw you.”

Jiang Qiuyi nodded, pointed, and said, ” This is my friend, please help her with a look.”

” Okay.” The director motioned: ” Does Miss Jiang’s hair need to be styled? ”

Jiang Qiuyi looked at her long, black hair in the mirror and the corner of her lips curled upwards: ” Of course.”

She sat down on one side and said, ” Then you  help me perm my hair and dye it in a color that suits me.”

The director got taken aback. “What?”

It is not that he is surprised for nothing, it is just that he had met Jiang Qiuyi twice and styled her twice, In each case, she only trimmed the ends of her hair, never dyeing it or doing exaggerated styling.

Jiang Qiuyi raised her eyebrows and looked at him with a slight smile: ” Didn’t you hear me clearly? ”

The director recovered his senses and said eagerly: ” Okay, what kind of style do you like? “

Jiang Qiuyi said indifferently, ” Yes, You are a stylist, let’s listen to you.”

In the end, the stylist made a wooden horse roll for Jiang Qiuyi, modified her facial contours, making her face smaller and more pretty.

Jiang Qiuyi was also quite satisfied. She raised her eyebrows and looked at the stylist: ” Thank you. ”

The stylist hurriedly said: ” Miss Jiang is born with beauty.”

He looked at Jiang Qiuyi’s fair and delicate face and said jokingly: ” With a skirt, Miss Jiang can go directly to the red carpet.”

She can go to the red carpet even if she doesn’t wear a skirt.

She reached with her bag, and the driver reached down to open the door for the first time.  “Madam.” Jiang Qiuyi said “Um”,  handed him what was in her hands,

Hi guys, I messed up the chapter updates, Just to guide you, all previous chapters are published so before reading go- through them to understand the story better.